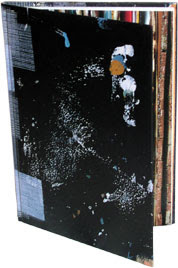 For thirty-six weeks, a sketchbook was sent in random order between four artists: two in Brooklyn, two in Belfast.

Every Wednesday, one participant would receive book. In order to maintain schedule, it was sent out the following Monday, giving each artist five days to complete a spread in response to the one that preceded it.

A small portion of each entry extends on to the following page. Beyond this, there was no communication between the artists concerning the content of book during its making.

book’s first trip across the Atlantic was on 2 June, 2003. Its final trip was on 2 February, 2004. By the time it was completed, book had travelled over sixty thousand miles.

Having fun with mum and friends…